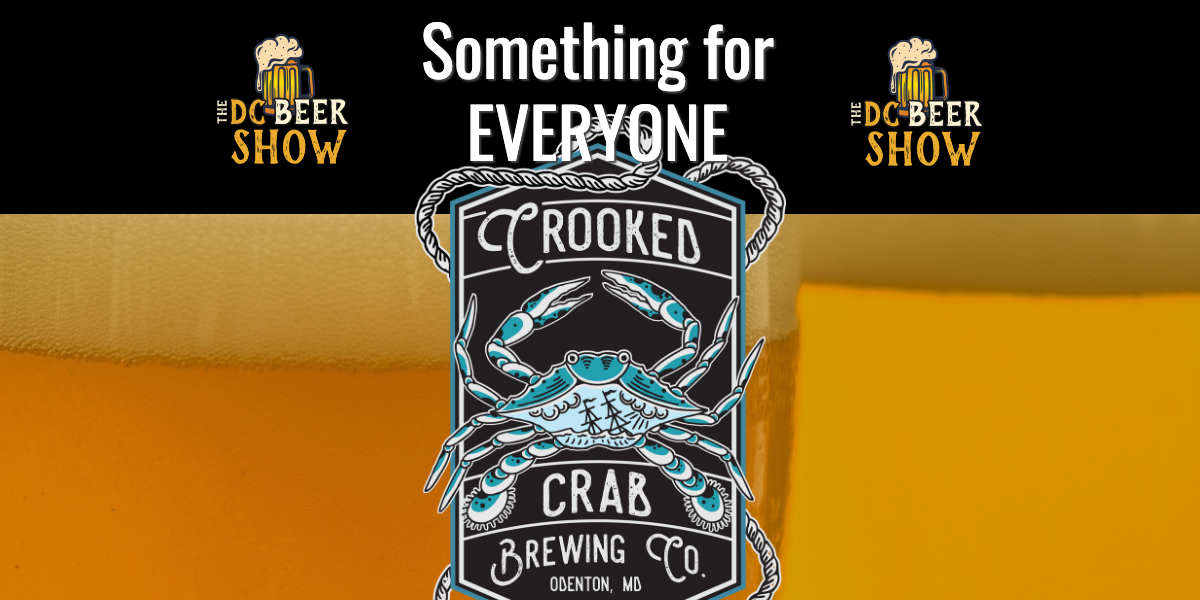 DC Beer’s Richard and Adam speak with Earl Holman and Dan Messeca about the history and beer offerings at Crooked Crab Brewing Company in Odenton, Maryland. Approaching its two-year anniversary, Crooked Crab has found its identity as a brewery that offers something for everyone. It always has at least a dozen beers on tap and will continue to create more high-quality brews in the future.

Earl, Dan, and their friend Alex Josephs became close friends while attending the University of Maryland in the mid-2000s. Over a few rounds of golf and a few more rounds of beer, they started talking about eventually starting a brewery. Ten years later, in August 2015, they began developing business plans to open their brewery. Two and a half years later, on February 15, 2018, they officially opened Crooked Crab.

Despite its name, Crooked Crab does not cook crabs, nor does it brew crabs (as the owners have informed disappointed inquirers). Instead, Earl, Dan, and Alex came up with Crooked Crab as an alliterative tribute to Maryland’s crab scene.

The Crooked Crab team likes to get creative when creating beer names. Many are music-inspired, like Chuck Brown Ale (the Godfather of go-go music), Started from the Bottom Lager (a tribute to Drake), and I Fought the Claw (a spin on The Clash’s I Fought the Law). Some other favorites are a Bohemian Pils called Pils Bo Baggins and a locally sourced pumpkin brew called Straight Outta Odenton.

In the coming months, Earl, Dan, and Alex look to continue to build a diverse offering of brews, possibly looking to focus a bit more on barrel-aged beers and lagers.

Crooked Crab is available in draft and cans in over 100 locations in Maryland and DC. And their canned offerings are growing. They just recently had a canned release of two flagship beers, High Joltage and Haze for Days, and are looking to do a canned release of an imperial fruited sour and hazy double IPA in early February.

Crooked Crab is also celebrating its two-year anniversary on February 15. Come and join the party at the Maryland brewery!