Hello and welcome to the “politics are in your beer whether you like it or not" edition of the Void. So grab a beer and buckle up. The Void is a bit extra today as a result of something we here at the Void have amplified for sometime: awful, sexist beer names. Here are a couple of Twitter threads from people discussing the subject of the name “Panty Dropper,” an extremely original name sure to sell tons of beer by name alone, from, ironically enough, Paradigm Shift Brewing. It came to a decent end, and hopefully the people in question have learned something, but we’re in a Void here, so can’t say I believe it.

In a related discussion, Jeff Alworth looks to craft beer and its inevitable #metoo moment.

DC Brau rallied on the steps of the Supreme Court with the ACLU for LGBTQ rights, in light of the upcoming Masterpiece Cakeshop, Ltd v. Colorado Civil Rights Commission decision.

AB-Inbev has ordered 40 Tesla semi-autonomous trucks with which to test beer deliveries. This is significant, of course, because beer also has labor issues. AB also opened the largest brewery in the Asia-Pacific region this week.

So far we’ve covered sexism, diversity, labor and international trade issues. Let’s stay with AB and talk about copyright issues. Once again, a brewery took the bait, as they expected someone would, made a Dilly Dilly beer, and they responded by something they were certain would go viral.

Not to be outdone, Lineup Brewing got a C&D from Beyonce. Good job.

Capitol Cider House is coming to DC in 2018 but… oh no. That name might be a problem. 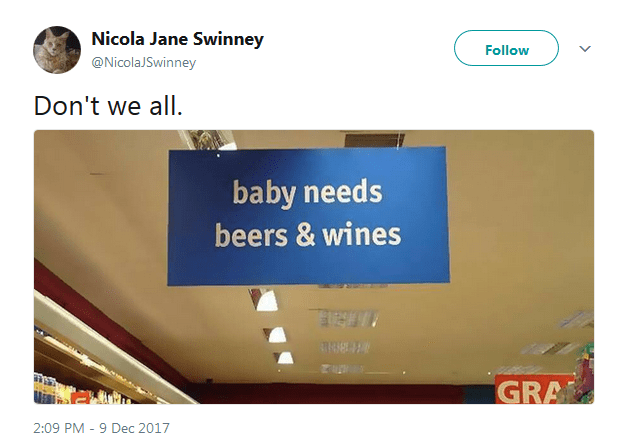 The anticipated Sapwood Cellars is opening in Columbia, MD late next year.

The downstairs bar at Pizzeria Paradiso in Georgetown is undergoing a bit of a change. ​

What’s wrong with Sam Adams? It might be the face of the company.

Are experimental hops the future of IPA? Well, in a way, the already are, and its time to embrace it.

Here are 5 completely different beers of varying difficulty to find to try this month. And, speaking of number 5, it is a DC Beer favorite for the season. Drink all the winter warmers.

Founders published their 2018 release schedule. Hope you like barrels, and if you like Founders, you probably do.

Thanks for viewing another edition of The Void, and remember, in the words of great American philosopher Homer J. Simpson, alcohol is the cause of and solution to, all of life’s problems.