The distinction between Pilsner and Lager is a tricky one. It’s reductive, though easy, to say all pils is lager and not all lager is pils. But there are brewers who make what they call pilsner without a lager strain of yeast by cold fermenting with an ale strain of yeast… and then German Pils is different from Czech Pilsner… and then Czechs believe there’s only one Pilsner, Pilsner Urquell, and all other pale, maybe-decocted, maybe-hoppy lagers are just that–pale lager. Not Pilsner… they say, like the Highlander, “there can be only one.” And that one is brewed in the Czech/Bohemian town of Plzeň. Confused yet?

In 2018, just as in 1918, people love lager. One difference between today and 1918 is that lager was kind of illegal in DC as Prohibition came early to our town in 1917. Our team of contributors came up with a cracking list of pilsners and pale lagers, but before I share their recommendations, I want to provide a bit of historical context.

First, the facts. DC-brewed lager is at least 163 years old. Historian Garrett Peck has narrowed the window down, writing that the first record of lager produced in the District dates to 1855. This revelation comes from his book, Capitol Beer, where we also learn that Alexandria and Virginia’s first lager was born in 1858, making this year the 160th anniversary of lager produced in Virginia and Alexandria.

As you’ll see from our recommendations below, beer drinkers today, just like beer drinkers in the late 1800s, love both lager brewed here and that brewed in other countries.

Inquiring with pilsner expert and Czech resident Evan Rail about the first Pilsner Urquell imports, he wrote, “Imports to the US started in 1873. One of the first cities to get Pilsner Urquell (though it wasn’t called that yet) was Racine, Wisconsin, which actually had a much larger Czech population than Chicago in that era.” 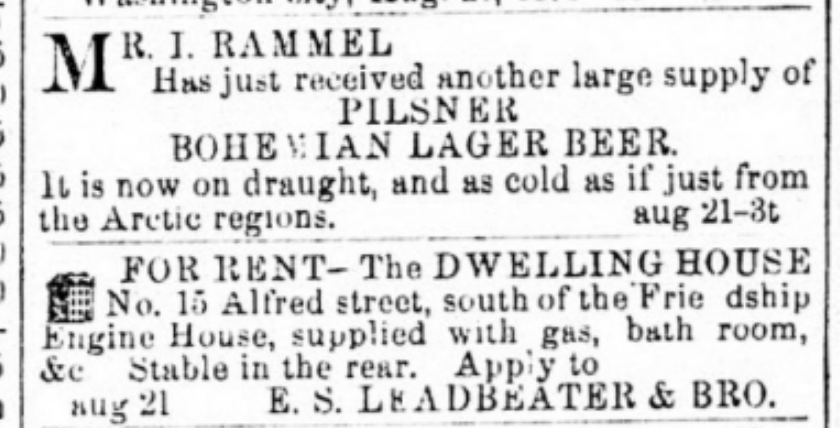 As you can see, in 1874, Alexandria’s Mr. Rammel had Urquell kegs “as cold as if just from the Arctic regions.”

“By 1883, the brewery actually had to make special barrels specifically for the US market, which they called ‘Americans.’ Fortunately, in that era they had a hundred or so coopers on staff,” Rail writes. Which makes sense as DC was crushing imported lager.

In 1885, the Solari Brothers, whose restaurant bordered the Willard Hotel, bragged of an ice box capable of storing “100 barrels of imported beer and two tons of ice. They would have received “Americans” as part of their huge cellar, among other lagers. The other beers? “Kaiser (Bremen), Thueringer pale and dark (Mulhausen), Libathaner (Bohemian), Pilsner (Bohemian), and Culmbacher (Bavarian).” 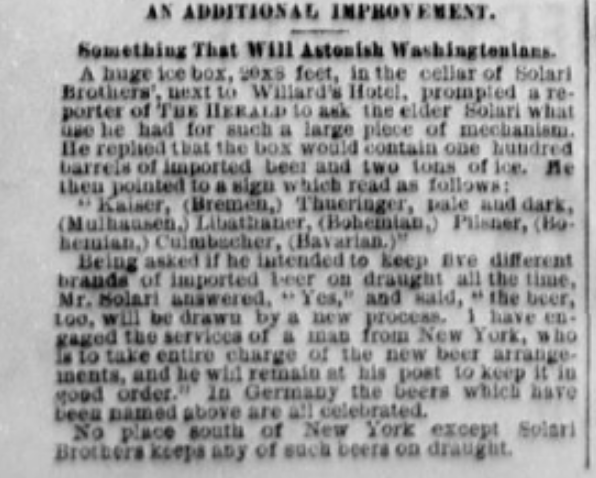 Many of these beers still exist and can be purchased in DC today. Seek out quality Bohemian and Bavarian lagers at some of the places listed below as well as Pizzeria Paradiso and Craft Beer Cellar. While Gerstenberg no longer exists (see below), we totally would’ve gone for the Hofbrau and Bohemian in that order in 1895. 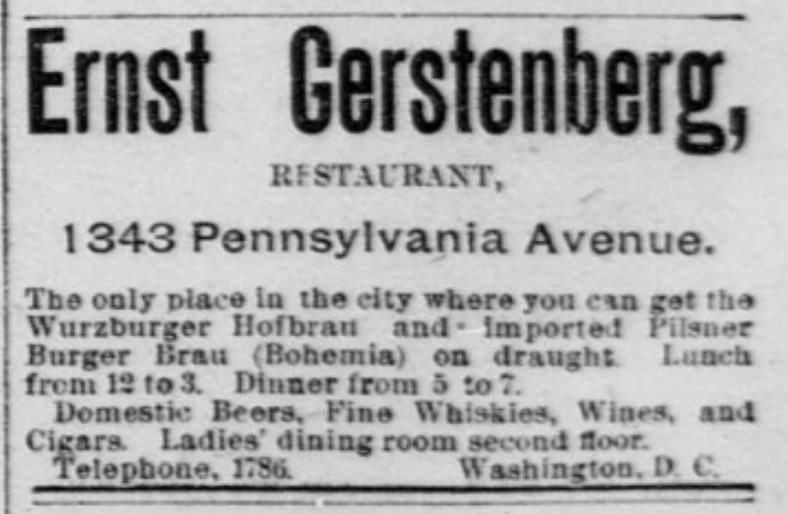 Turning from the past to the present, I asked some DC beer staff members and other local beer jerks and Twitter personalities about their favorite pilsners. What follows is a conversation on which pilsners and pale lagers we love and seek out:

Locally, I like Ocelot's Sunnyside Dweller. It's frequently on at the Pints and Smoke and makes for an easy choice. Speaking of Pint, they sell more Firestone Walker Pivo Pils than any other bar in America, I'm told. That's also a good one. Champion's Shower Beer and Hardywood's Pils are also solid.

Anyway, my second pick here is Koutska 12, sometimes on tap at ChurchKey. Both the Shelton Brothers and CK have done a good job getting fresh kegs.

Jever, Rothaus, Half Acre Pony, Pivo, Revolution Pils, shout out to Mickey’s Grenades (not a pils, but I want one now), Pearl Snap from Austin, Champagne Velvet from Upland, Sunnyside Dweller, Bibo from Creature Comforts, Post Shift from Jack’s Abby, and of course, High Life 7 oz from Breadsoda.

I'll leave off Sunnyside Dweller since everyone is going to include that. I'm also doing some shout-outs to Bohemian Pils and Helles styles on my list. Typically, a Bo pils is going to present as a little hoppier – the Denizens and Bell's, specifically – but I excluded the "IPL" category since that's pretty distinctly American.

I've been on the Koutska 10/12 train for close to a decade. I'd end it there if you could actually find them on a regular basis in DC.

I actually still really enjoy North Coast's Scrimshaw. Total underrated classic in my opinion. Often seen at Breadsoda or Bourbon. Sixpoint Crisp is a bit overlooked as well as a delicious and easily-accessible option around DC. I assume you can find that in many stores still.

I'd also say whatever Dovetail puts out, but I figure that is out of scope/locus.

I think Bill's favorite is Downright and Ardbeg. Possibly together.

I feel like North Coast should get more love in general. Scrimshaw rules.

If I see Downright or Pivo, I’ll nearly always order them, and I’m glad they have the presence they do. I also dig Radeberger when I see it (usually in New York).

I basically just rotate through Shower Beer, Downright, and Pivo. I am boring and predictable.

I'm really glad y'all mentioned Downright, because it doesn't deserve to get overlooked as much as I think it does. I'm thankful Port City put it into year-round rotation.

Another localish one that gets its share of space in my fridge is Ardent's German-style Pilsner. I think it's pretty outstanding.

-Sean Dalton [Ed. Note: It just medaled at GABF, and you can find cans of it at better bottle shops]

I had the slow pour pilsner at Bierstadt Lagerhaus in Denver, and it's worth the trip just for that beer. So delicious. Downright, Pivo, and Sunnyside are my regular rotation, but I love Victory Prima and Braumeister, too. Putting in a shout for Great Raft's Southern Drawl and Hops & Grain's The One They Call Zoe (out of Austin). This is an excellent list we've put together, and now I am thirsty.

The takeaway here is that whether you get in a time machine and go back to the 19th century or are out and about bopping on the block (on the bock? different post, I guess), pilsner and other clean, crushable lager are going to be on the agenda. The history of the style is rich in DC, and the availability of standout examples has never been better. The beautiful thing about these beers is that nearly every “beer city” in America has at least one brewery going after the style in its ideal. Pilsners aren’t the new hotness, but as seen above, they have been the hotness to some degree for a long time. Next time you’re out feel free to eschew the latest lactose-laden science project and signal to your server that you’d like to go with the classic. Odds are you won’t be disappointed. Prost!