O’Zapft Is! Oktoberfest Begins This Weekend! Sights and Scenes from the Real Thing

Since Oktoberfest kicks off this weekend, it seems like a great time to look back on my visit to the Theresienwiese last year. The festival is a caricature of itself in a lot of ways. On one hand, it was exactly as I expected, but on the other, there were plenty of surprises.

It would be reductive to call the Oktoberfest a “beer festival.” For readers of DCBeer, we’re not talking about sampling hundreds of beers under a pop-up tent in a parking lot. Perhaps it is more apt to call it a “drinking festival,” but even that doesn’t quite encapsulate the celebration. You’ll see everyone from the uber-drunk (of course), to families with children, to the elderly. The festival grounds feature the famous tents (more below), rollercoasters, games, and plenty of food. It really is a giant carnival celebrating Bavarian culture.

My wife and I attended Oktoberfest last year to kick off our honeymoon. How apt is it that the festival itself originated as a celebration of the marriage of King Ludwig II to Therese of Saxony! The party for the couple was celebrated on the current festival grounds called the Theresienwiese (named for the bride) and throughout Germany. The townspeople of Munich so enjoyed the wedding celebration (and the free beer), they returned the next year and Oktoberfest was born. 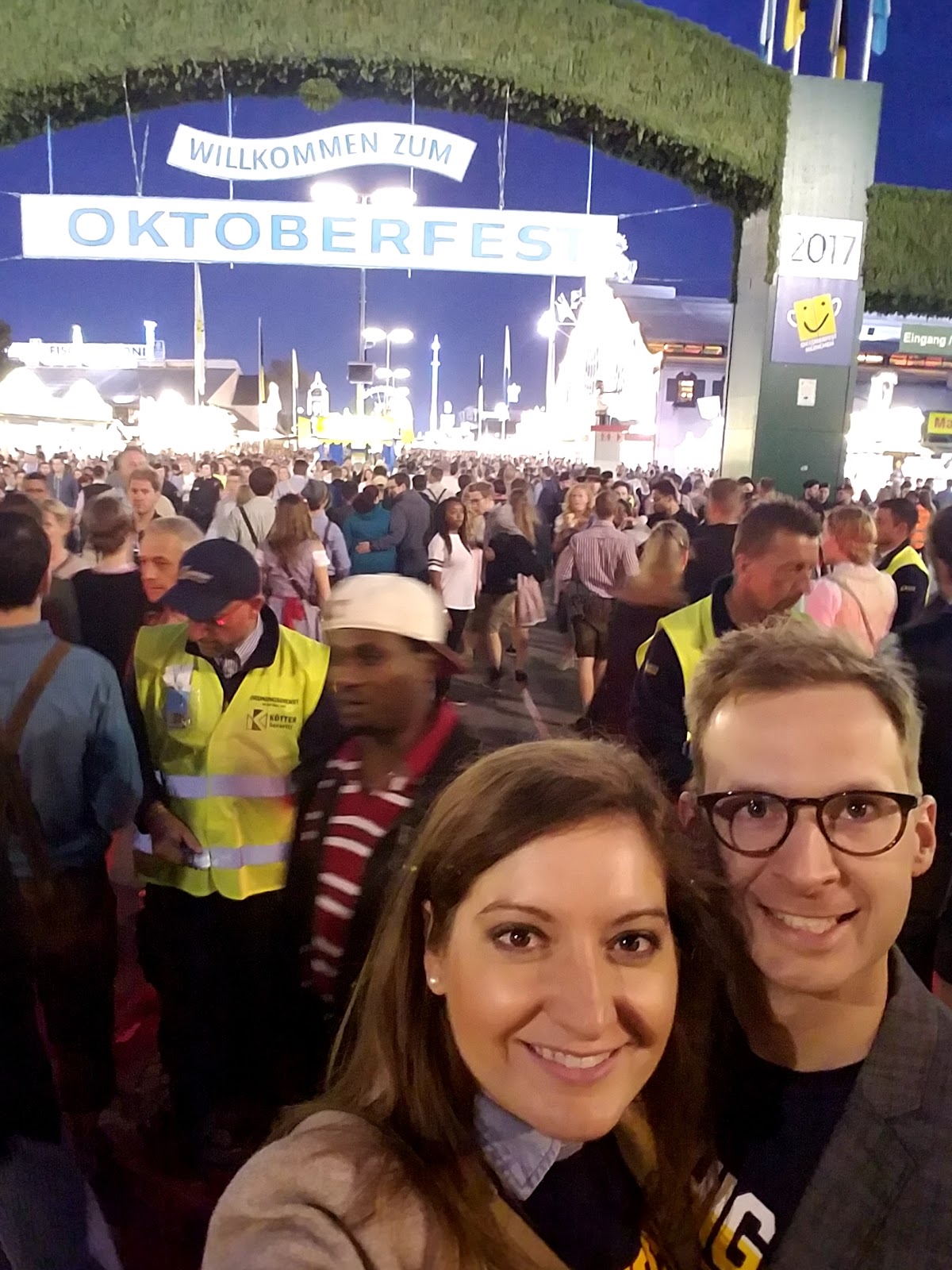 There is plenty of information floating around about each massive tent, and I did some research about which would be good fits for us (and which wouldn’t). There are 14 different tents on the Wiesn grounds, and each features one of the big six breweries. Each has its well-discussed quirks and sensibilities. For example, the Augustiner-Festhalle is the best tent for folks wanting the best beer and is generally an older crowd, Hacker’s roof is designed by an Oscar-winning set designer, Hofbräu is for Americans and Australians who want to get hammered, etc.

From a logistical standpoint, you can tell Oktoberfest has been going on for hundreds of years. First, there are no bags allowed; my wife had a small purse, but that’s it. There is plenty of security at the entrance to the grounds and wandering around, but nothing that was obtrusive. Second, everything you buy is cash only and you pay immediately. This is fantastic for when you’re done with your food and beer (or two or three) and want to move on or head home.

By the way, the term “tent” is a pretty loose definition. These are massive structures, each very different, and some can fit up to 10,000 people at a time. Interestingly, there is no standing room. If you are going to be served, you must have a seat to sit in (not that you need to be seated, but you need a place). Feel free (if you must) to dance on the benches, but know that if you stand on the table (as we witnessed), you will be escorted out quickly. Alternatively, it is truly a sight to see someone stand on the bench and chug a liter of beer with a crowd of 10,000 cheering them on. 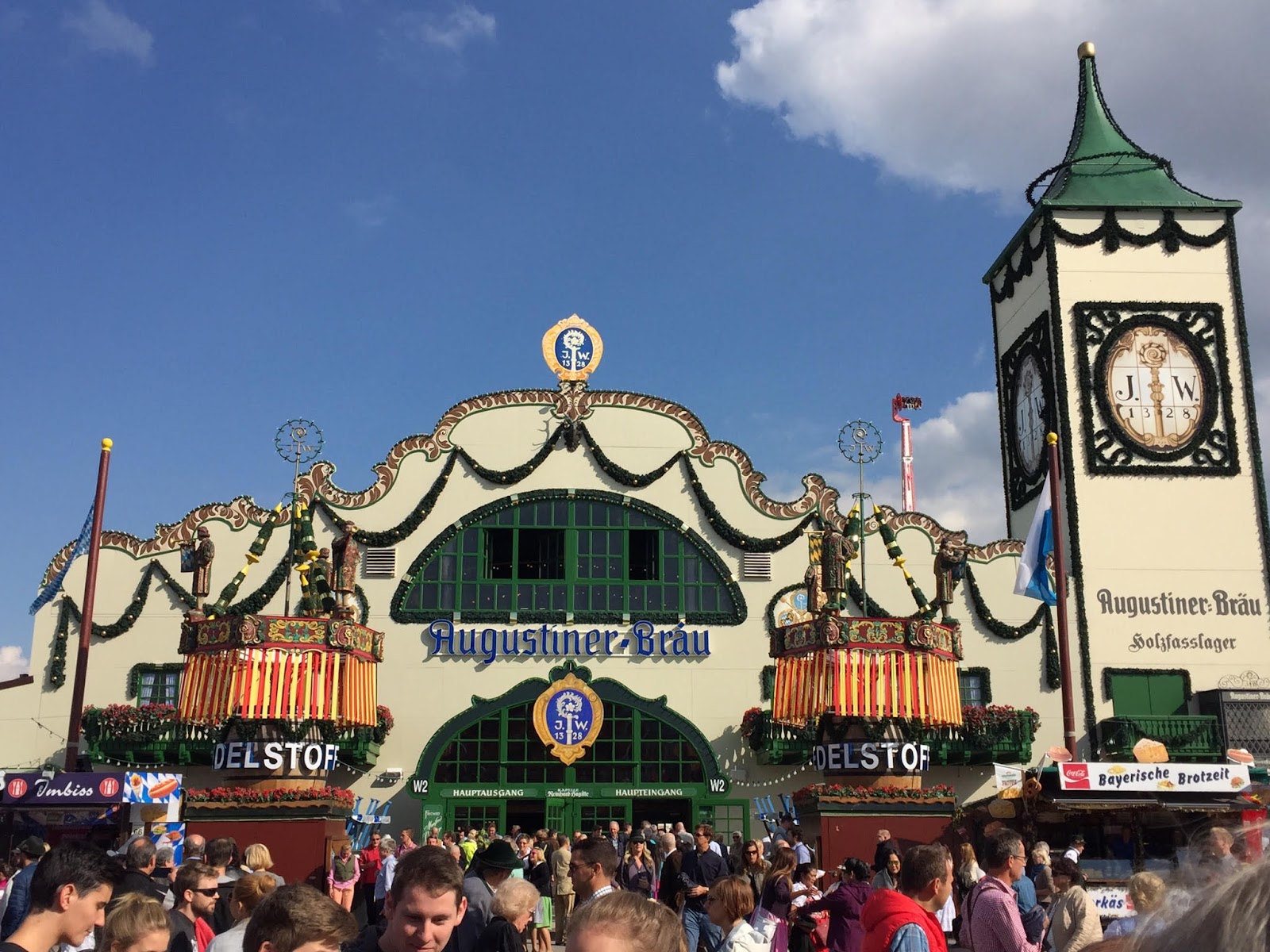 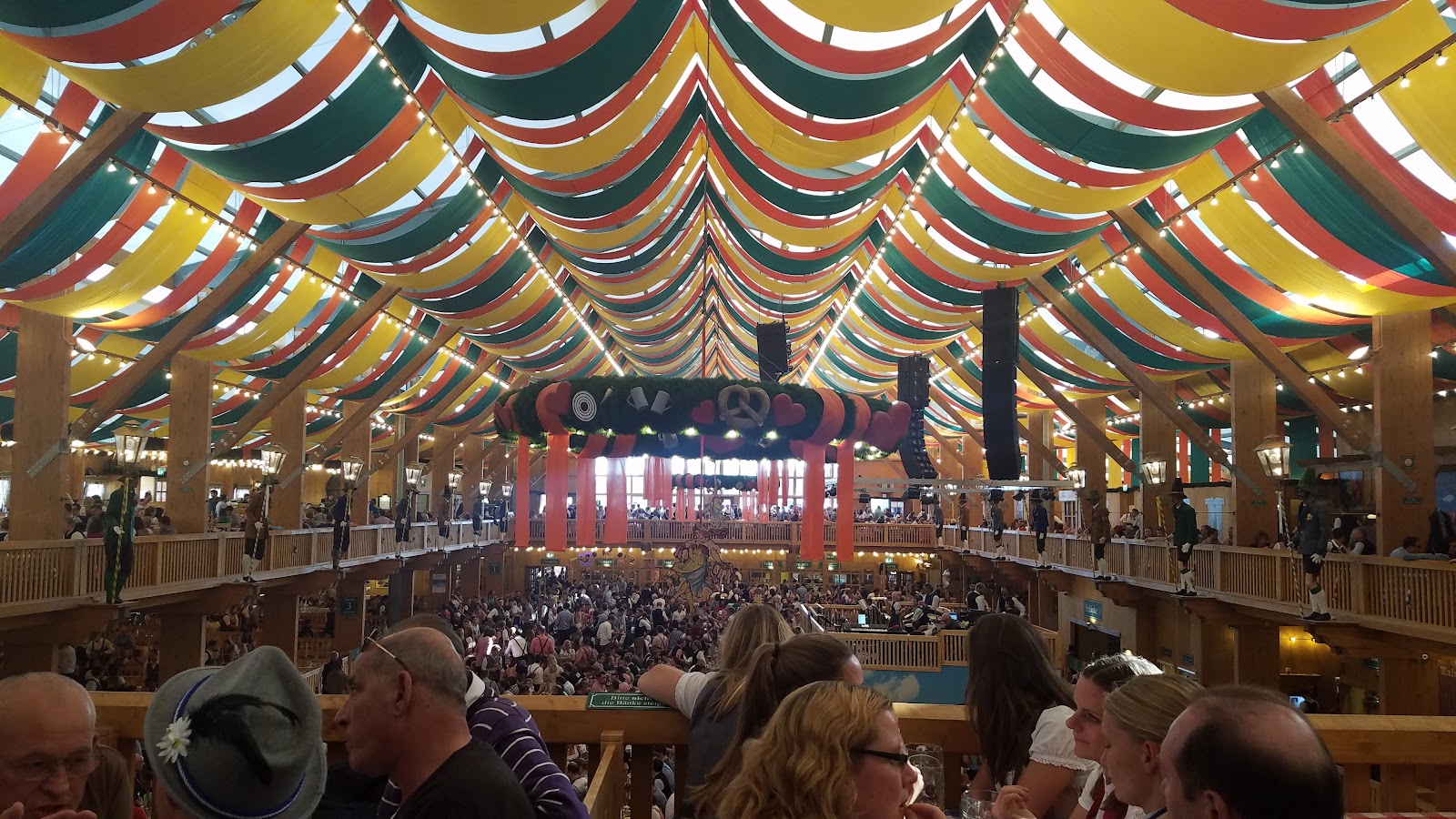 Above you see the entrance to the Augustiner-Festhalle, and inside the Shutzen-Festzelt – a tent designed after a ski lodge. Below you can see how the ceiling of the Hacker-Festzelt matches the typical Bavarian sky. 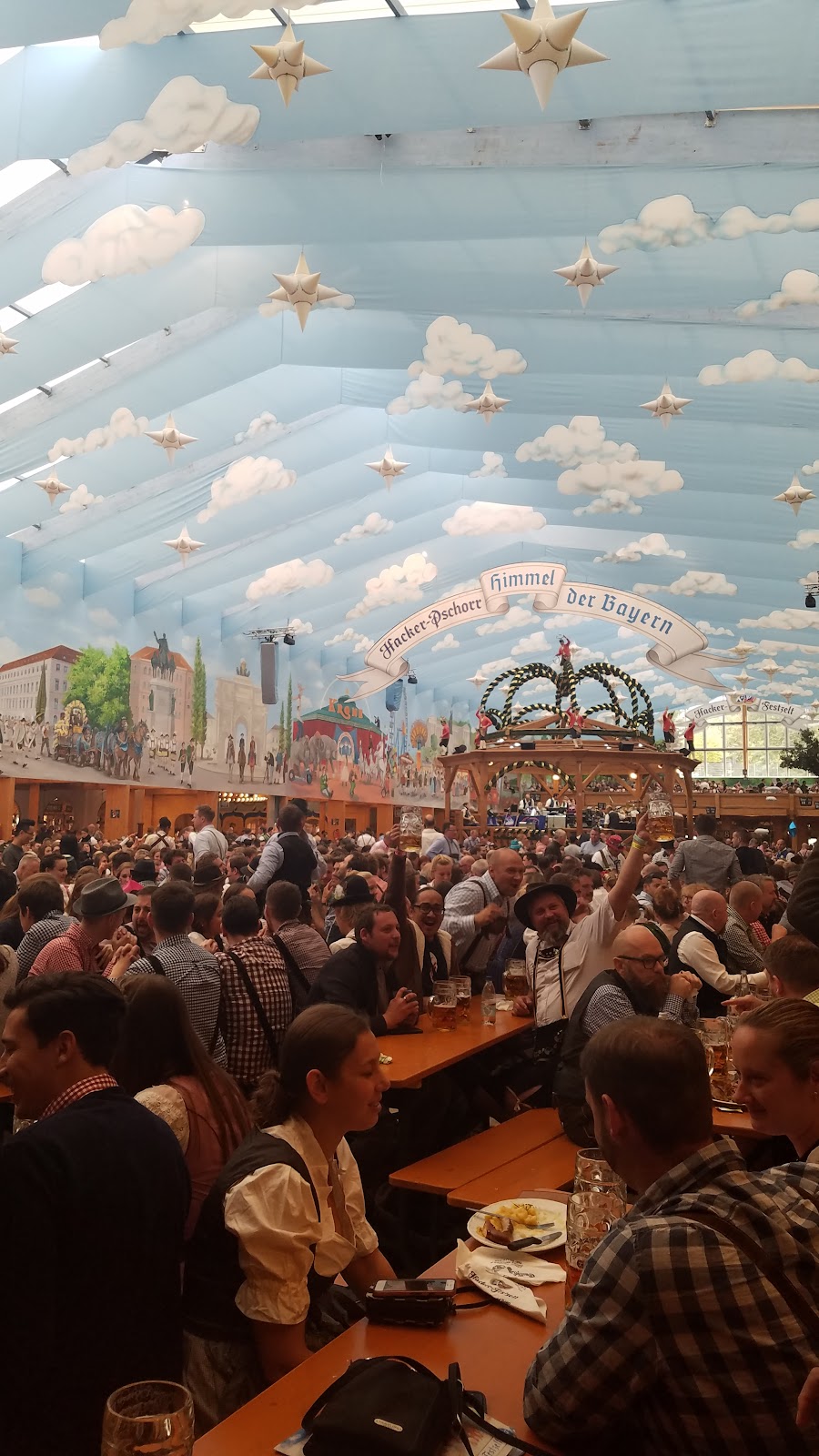 On the beer front, Festbier isn’t an Oktoberfest-style beer we’re used to here in the states, which is typically Märzen. Märzen was a bit more popular a number of years ago, but the beer now isn’t nearly as dark in color, nor is it as sweet. Rather, it is an easy-drinking lager beer with a crackery malt character, firm bitterness, and pepper-floral hop aroma. There are six different versions of this beer at Oktoberfest from the “Big 6” Munich breweries: Augustiner, Paulaner, Hacker-Pschorr, Spaten-Franziskaner, Löwenbräu, and Hofbräu.  Of these, Augustiner is the only independently-owned brewery and is the only one still serving from wooden casks. I liked it the best with Löwenbräu probably second. But, if I’m honest, I found myself not thinking about the beer, but instead enjoying conversation and meeting new friends. I latched on to German drinking culture fast. 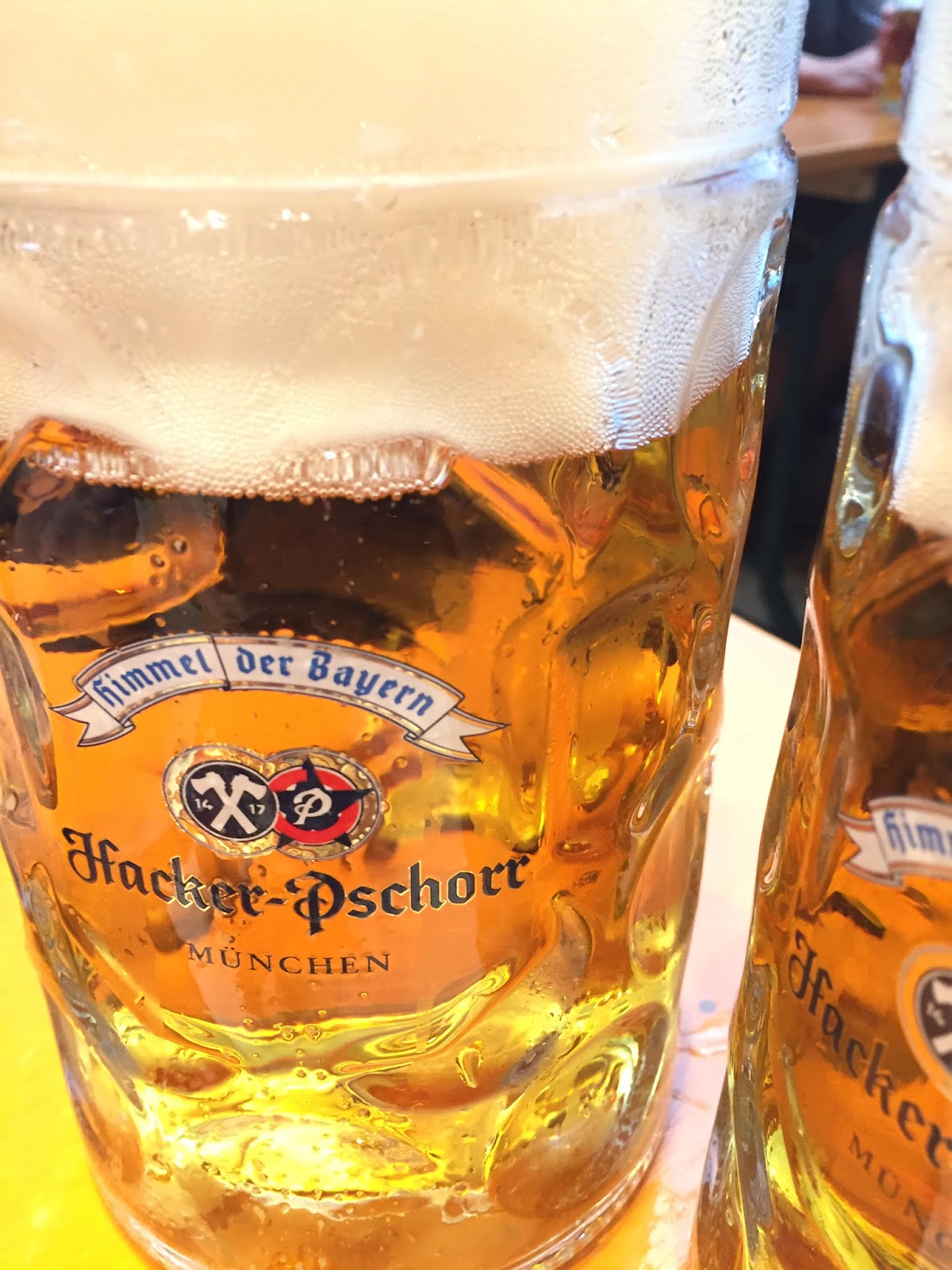 The thing to remember is that the LOWEST ABV this year is the 5.8% Hacker-Pschorr – the highest is 6.3% Hofbräu. When drinking liters (the only size, called a Mass), the higher ABV can stack up after an afternoon of sitting (or wandering), so eating is crucial. A lot of tents feature various food items such as roasted duck, roasted chicken, or various oxen specialities.  Not to mention the availability of giant pretzels everywhere for a few Euro. 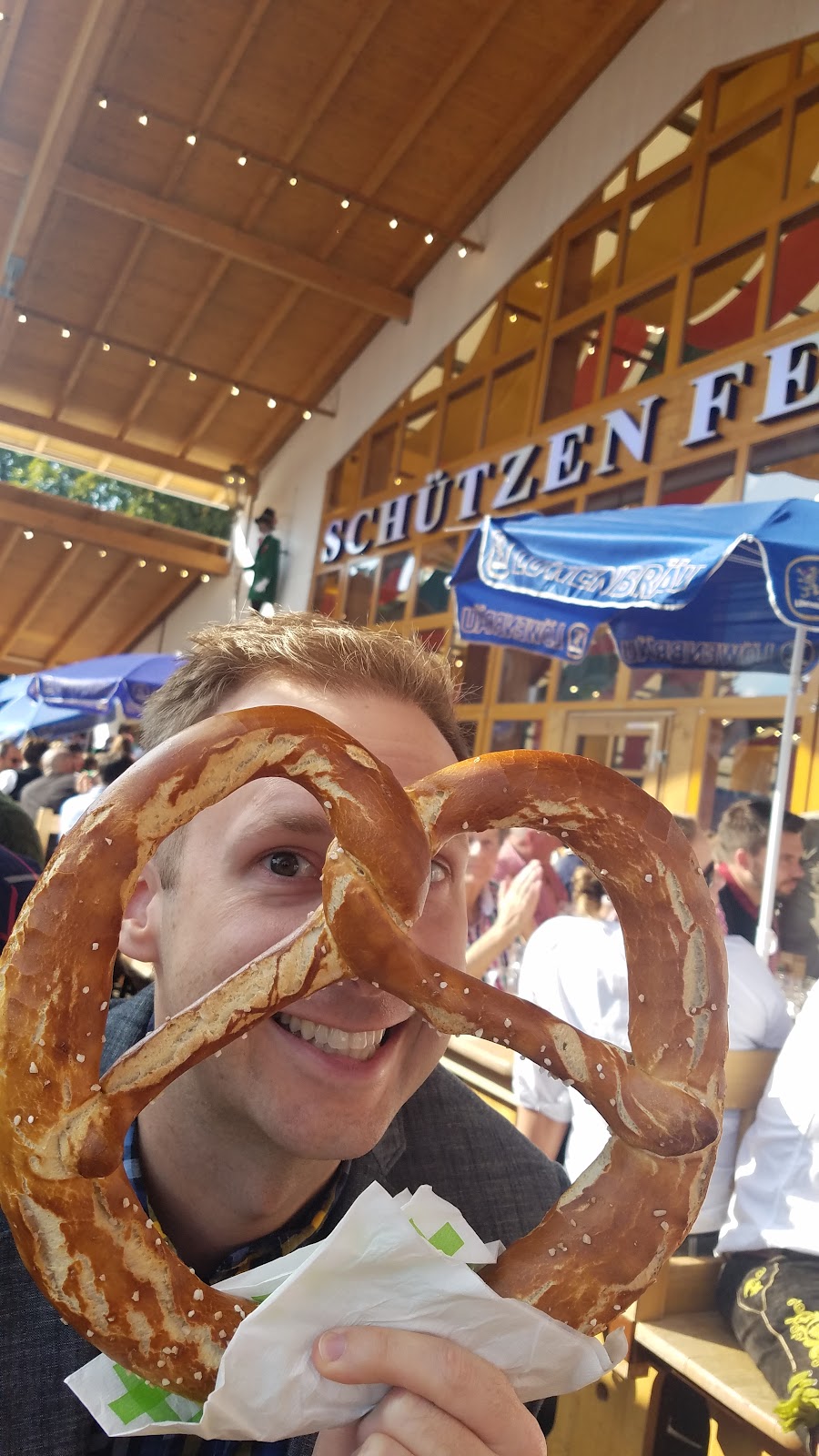 One of the things that struck me was just how excited everyone was to be there, to enjoy each other’s company, and to celebrate! We saw very few people getting into arguments, and even those people who were too drunk to stand were fairly rare. Anyone who tailgates a college football game has seen the same (or perhaps worse).

We were also struck by how many different age groups there were. There were the awesome elderly folks who’ve been coming to Oktoberfest since they were kids, there were folks who came during their lunch for a walk and a sandwich, and there were families walking with strollers. One regret we had, though, was not buying traditional German attire. This was a piece of advice we decided not to take. While I didn’t feel like we stood out, it felt like probably 80-90 percent of attendees wore lederhosen or a dirndl.

We attended the festival on two days. By the way, admission to the grounds is free. The first day we went mid-week in the morning and stayed until evening. The second, we went over to the grounds on a Saturday night. What a difference! On the weekday we had no issues going in and out of tents and finding seats. Saturday night on the other hand was packed! All the tents were full, so we decided to go to an area called the Olde Wiesn, which was created in 2010 to make a more traditional and family-friendly area. You pay a couple of Euro to get in, but there was plenty of space for us to sit and have a beer on one of our last nights in Munich.

All in all, I can’t wait for the opportunity to go back, and I’m certain we will. Oktoberfest truly is a spectacle to drink in (pun intended).  There is plenty of revelry to be had by all and with even just a little planning, we were able to have a perfect time at the Wiesn.