Consistency and quality are cornerstones of a fantastic brewery. It’s easy to think that making the same beer over and over is as simple as just using the same recipe, but that couldn’t be farther from the truth. In fact, replicating quality beers takes investments, both time and money, in good quality control practices.

Ben Evans, CEO and Head Brewer at Hellbender Brewing was kind enough to chat with me when I asked about their brewery’s quality control practices. “A consistently high quality product is the key reason for having a good lab program” he says, “[t]he program allows us to quickly and efficiently grow up yeast as well as allows us to use multiple yeast strains more easily. Once a great recipe is developed, consistency is everything in this business.”

A brewery’s quality control measures can take many forms, including working with yeast as Ben mentions, or it can be as simple as taking and recording accurate and complete measurements.

At Hellbender, Ben and his team clearly take a lot of pride in their laboratory work and have an exceptional laboratory. When I first started thinking about writing this piece on labs, it was clear I needed to chat with them. 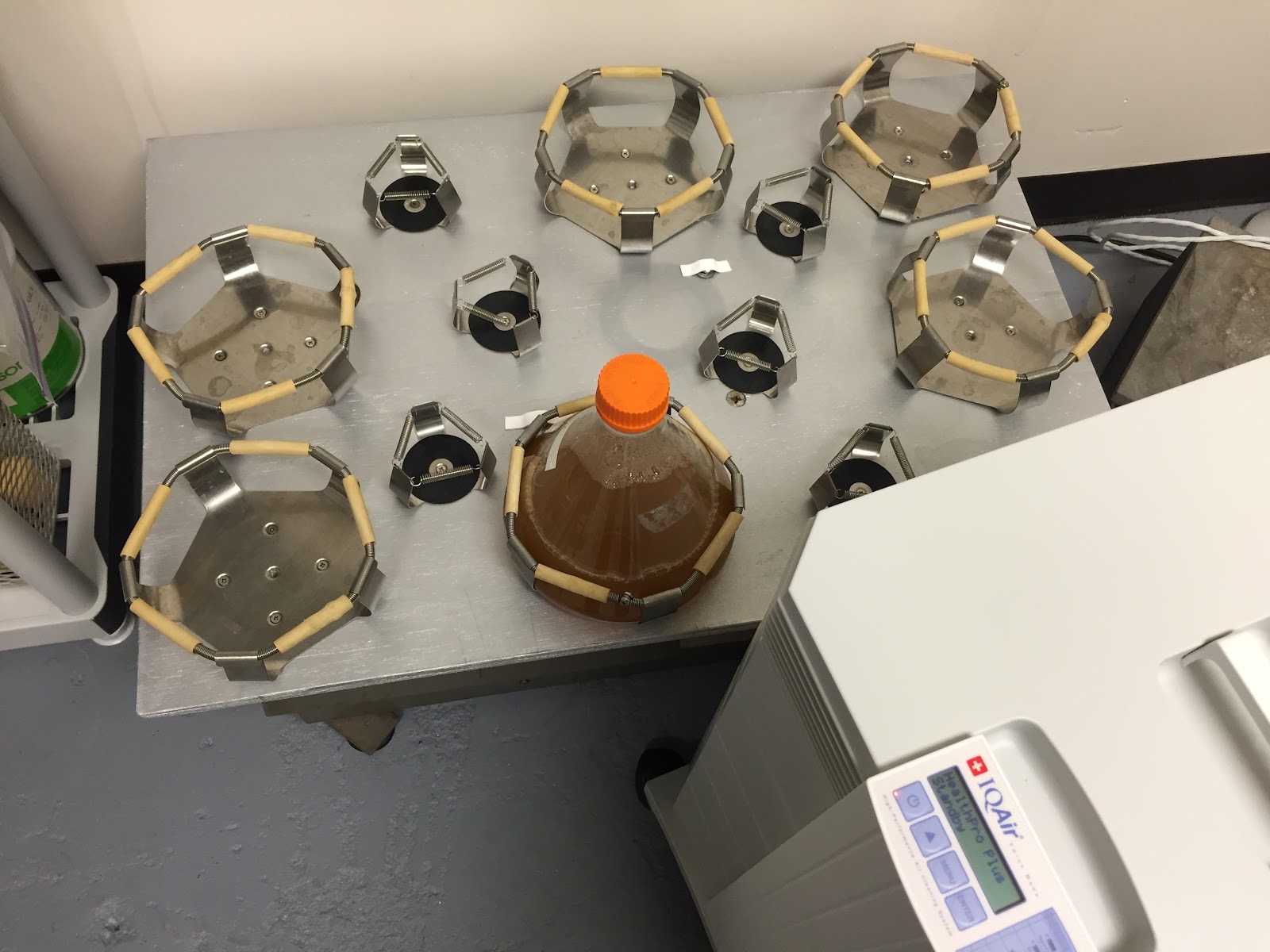 The people responsible for handling the yeast (and other QC measures) at Hellbender are Ben Evans and Peter Van Berkum. Ben’s background is in biology, and he has a Master’s in Neuroscience. He gained knowledge of single-celled organisms through his work at the University of Maryland-College Park.

Peter Van Berkum is the other half of the lab team at Hellbender. Peter has a PhD in Microbiology from the University of London. He’s worked as a microbiologist for the government and worked directly with nitrogen-fixing symbiotic bacteria which involved DNA sequence analysis (stick with me here).

Handling and managing yeast can be an incredibly complicated endeavor and brewers will often use the same pitch of yeast to brew more than one beer.  A “pitch” essentially refers to the amount of yeast needed to brew a beer.  In essence, this means that a brewery will buy (or grow) enough yeast to make one batch, then use it again on successive batches.  One typically makes a low-strength, low-hop beer, then uses the same yeast to brew either the same beer again, or a higher-strength, higher-hopped beer.  By way of example, a brewery may brew two batches of pale ale, two batches of IPA, and a batch of double IPA (and so on) in succession. With proper yeast management, the brewer need only source one batch of yeast for these brews.

By using the same yeast repeatedly, it is important to examine yeast through a microscope to ensure that the yeast is healthy and multiplying properly.  Harvesting yeast that flocculates (groups together) and falls to the bottom of the fermenter first will not have the same characteristics as those that do later, so it is important to manage which yeast is being re-used.  Poor growth and yeast mutations will result in inconsistent beer that will taste poor. As Ben explained to me, “[w]e have been growing all of our own yeast cultures from colonies on a petri dish up to 25-50 BBL pitches in-house since we opened. We use our autoclave for making sterile growth media for the early stages of growing yeast cultures, and we have a dedicated 4 BBL yeast propagator with temperature control in the brewhouse for final growth stage for our large pitches.” 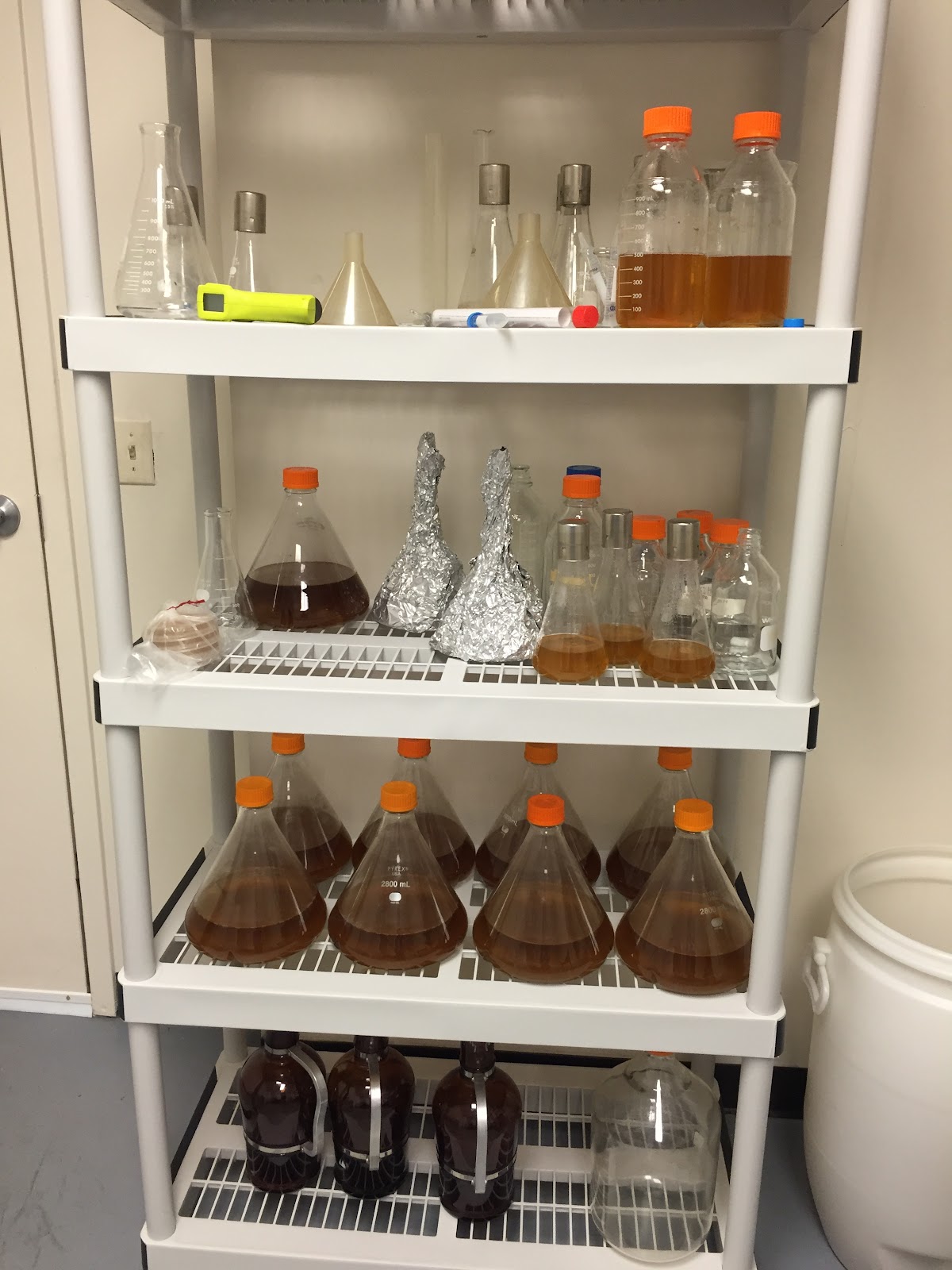 Glassware and autoclaved media ready for use

Remember, nothing toxic can can survive in beer, so when using words like “mutations” and “bacteria” we’re only talking about beer flavor and stability. Batch to batch, the Hellbender team performs cell counts and tests for yeast viability. The reason for doing these sorts of analysis is to ensure that the yeast can properly ferment the wort. If there is too little yeast or the yeast isn’t viable, flavor will suffer. Poorly performing yeast can lead to excessive esters, soapy off-flavors, and so on.

If yeast is not viable, it shouldn’t be used in the next batch. Ben explained how they go about checking viability. “We use a 400x microscope for cell counts and to check viability on all of our yeast strains. This involves diluting a sample of yeast, staining it with methylene blue, and doing a cell count on a hemocytometer. This lets us know how many healthy, viable cells/mL we’re pitching into each batch.” 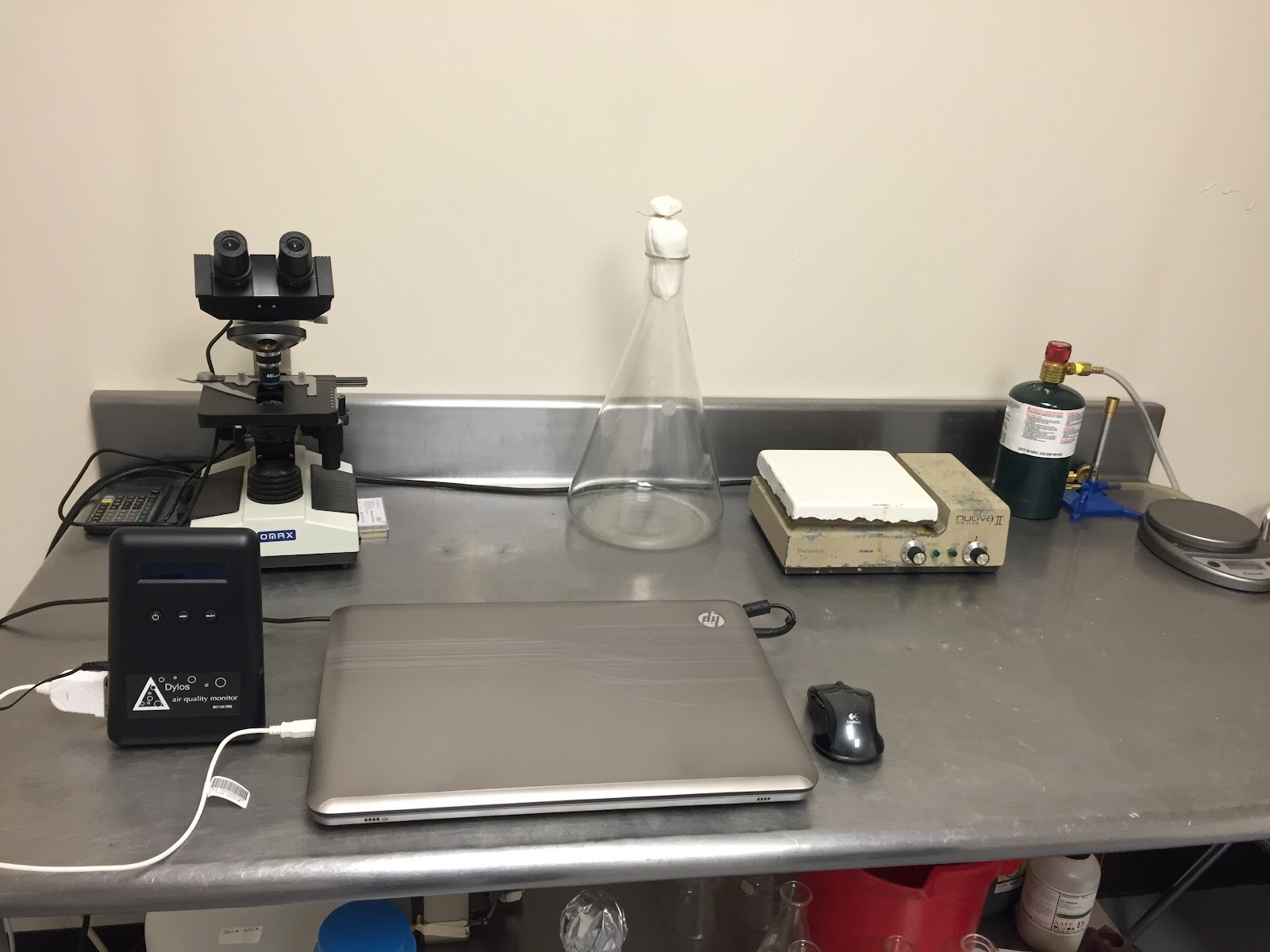 In addition to their work on yeast, Ben explained that they perform a lot of preventative measures. “We add specific nutrients to our growing yeast cultures,” he says, “and we adjust water chemistry to ensure a healthy fermentation. A stringent cleaning regimen both inside and out of our fermenters and all beer pathways is our best control against infection.”

Returning to our discussion on pitches of yeast, Hellbender currently uses the same pitch of yeast five or so times.  As they continue to grow, they hope to go beyond their current five generations of yeast and hope to get to 8-10 generations. Yeast is often most healthy and robust after being used for multiple generations at a time. It is also expensive, so many brewers prefer to repitch the same yeast for multiple batches. Ben admits that using the same yeast just five times before replacing it is being overly cautious, but at this point in time, the risk of contamination or yeast mutations with successive uses is too high.

Speaking of brewery growth, he explained that their next lab purchase will likely be a DO (“dissolved oxygen”) meter. It is an extremely important tool for analysis of the oxygen dissolved in liquid. As Hellbender hopes to can their beer later this summer, the need for a DO will go up since oxygen in canned beer can cause beer to go stale. There are also upgrades to their current equipment that would be useful moving forward which include a larger autoclave (to sterilize items), a freezer to build up the yeast library, and a laboratory laminar flow hood to ensure an even cleaner work environment for culturing yeast.

It’s clear to me that Ben and the team at Hellbender are making a wise investment in their lab which will ensure their beers stay consistently delicious as they expand and grow. Stay tuned as we check in with other area breweries to hear about their lab and quality control work.

Special thanks goes out to Ben Evans at Hellbender for taking the time to answer my incessant questions.