3 Stars Brewing Company will release "#ultrafresh," a new double IPA this Friday, May 13. A limited quantity of the beer wil launch at the brewery starting at 4pm, and the rest will be available through select retailers in the D.C. area. 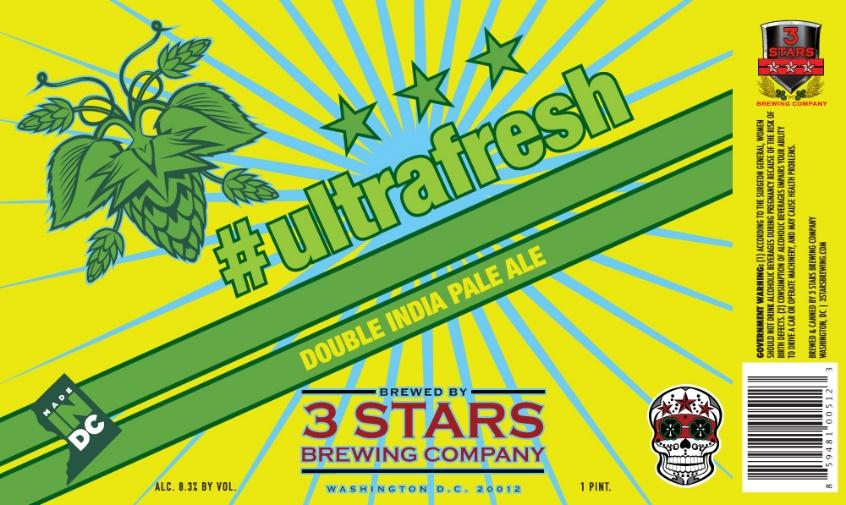 The new release weighs in at 8.3%. It features Columbus, Topaz, and Galaxy hops on a malt bill of Pilsen and a touch of wheat. According to a press release, "this is a bright, crisp, juicy and bitter DIPA perfect for enjoying on the patio, by the pool, or at the ballpark." Northern Brewer describes Topaz, a hop we haven't seen much of, as having "a rich and intense aroma of fleshy citrus and apricot, with a strong "dank" overtone and a hint of sulfur. Very similar to Summit, Apollo, and Columbus, but with a softer citrus edge – also similar to Amarillo."

#ultrafresh is different than the brewery's other double IPA, Two to the Dome, which features Centennial, Cascade, and Citra hops. This will be the third 3 Stars beer to be canned in 16 ounce tallboys; it joins Citra Lemon Saison and Ghost White IPA in the canned lineup.

The new offering will be an ongoing series brewed throughout the summer and fall. Each batch will be released in limited quantities to ensure consumers drink it when it's at fresh as possible.