If the adage “you get what you pay for” holds true, Anheuser-Busch apparently paid for quite a lot at Nationals Park during the off-season. A visit Saturday, ostensibly to watch the Nationals tackle the Twins in an exhibition tune-up but really a beer-finding mission, offered a glimpse of what has changed in the park’s beer offerings.

The big news this offseason was that MillerCoors, which had been the team’s promotional partner since 2005, before baseball even returned to Washington, had been replaced by Anheuser-Busch InBev. The Washington Post’s Scott Allen has more of the details here in an excellent article and you can read more about the business of beer and baseball in this Forbes article. ABI was already engaged in a partnership with Major League Baseball that extends until 2018. The promotional partnership signed between ABI and the Nats is exclusive, unlike the previous one with MillerCoors. I suspect that kind of exclusivity costs a pretty penny, and it manifests in a Bud-intensive experience from the moment you walk into the park.

Gone is the Red Porch and the Red Loft, replaced instead with the Budweiser Brewhouse and the Bud Light Loft, respectively. Not interested in either of these? Ascend to the 200 level and stretch your legs on the Budweiser Terrace (formerly the Miller Lite Scoreboard Walk). At any of these venues, feel free to pay $10(!) for a 20 ounce pour of Budweiser or Bud Light, except during happy hour, which runs from when the gates open to 30 minutes before the first pitch, when ABI beers will be $5 on the Terrace.

It isn’t just ABI’s core brands that are now heavily promoted. ABI buyouts like Blue Point and Goose Island each have their own stands within the 100 and 200 levels (admittedly we didn’t get up to the 300 level on this trip), as do homegrown brands like Shock Top, Bud Light Lime, and Lime-a-rita. Elysian appears on draft in the Brewhouse (and they’re bringing in interesting offerings; Saturday it was a pineapple habanero sour). It’s fairly unclear to me why people in Washington, DC would buy into Blue Point Brewing Company (established in Long Island, as its stand displays prominently), but the same could be said for the Sam Adams stand it replaced.

Fans of local beer will find a lot to like. Again, we weren’t up on the 300 level, but we did pass by two District Drafts carts, and we suspect all of the others from last year remain in place. These carts included DC Brau (The Public), 3 Stars (Peppercorn Saison), Port City (Porter), Atlas (Rowdy), Mad Fox (St. James Irish Dry Stout), and Old Ox (Alpha Ox). For the uninitiated, these stands each feature one beer from four different local breweries. Those breweries’ offerings rotate throughout the season. Additionally, other local breweries like Flying Dog (Snake Dog and Raging Bitch) now appear on draft in some Baseline Brews stands, which is a welcome change from last year. Same with Victory (Summer Love), which is distributed by ABI’s partner, Capital Eagle, in DC.

(Click on the photo below to see an album of photos from Saturday). 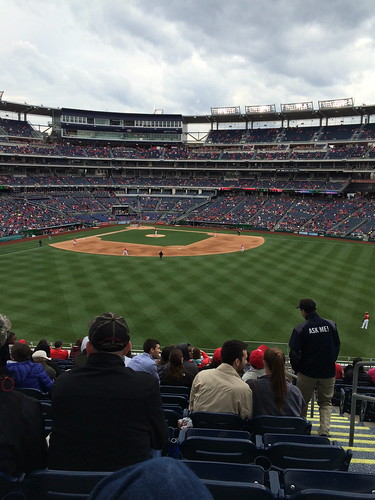 Overall it seems like there are more beer options this year. In terms of SKUs (individual product codes), there appears to be more variety. A lot of these are under the ABI umbrella, sure, but they do still offer stylistic variety to some extent. This is especially true on the concourse, but it does feel like the options at the Budweiser Brewhouse are thinner than they were last year. I remember being surprised at the quality of the draft list at the Red Porch Restaurant in previous years (drinking Allagash Saison/White or Boulevard Tank 7 at a ballpark is a welcome experience). This year, aside from one draft each from some local stalwarts, there really wasn't very much to be impressed by. Part of this is because the craft portfolio for Capital Eagle isn't as robust as that of Premium Distributors (the MillerCoors outfit in DC). Part of it, maybe, is that I showed up for an exhibition game and maybe they're bringing in more beer as the season goes on. Maybe we will see more offerings from the likes of Victory, Troegs, Heritage, etc. (all brands under the Capital Eagle portfolio) in addition to the local lines (many of which are represented by Premium). I’ll give the situation the benefit of the doubt for now.

Scott Allen’s article mentioned that beers from other breweries would still be available under the new agreement. At no point during our travels around the 100 and 200 levels do I remember seeing a Miller Lite, Coors Light, or any other MillerCoors core brand. Am I surprised? Frankly, no. A profit-seeking company like Anheuser-Busch paying to become an exclusive promotional partner only to leave the door open behind them for their closest competitor wouldn’t make much sense to me. I suspect MillerCoors products are available somewhere in the park, as it was reported they would be, but I also suspect they’re being poured in a fairly remote place in a less-traveled corner. It’s true that last year when Miller held the partnership Bud products were more widely available than MillerCoors products are now, but it’s important to remember that MillerCoors didn’t hold an exclusive partnership.

On the one hand, perhaps it’s unfair to judge the new regime on the basis of one exhibition game. On the other, these games aren’t just a dress rehearsal for the team but also for the stadium. I would be surprised if the beer offerings I saw Saturday were radically different from what’s slated for the rest of the year (rotating local drafts aside). Overall, the new promotional partnership seems heavy handed, but such is ABI’s way, what with the “never backing down” and “brewed the hard way” ads; the ads mocking craft breweries, infamously even those they’ve just purchased; and the anti-competitive distribution practices.  ABI isn’t well-known for playing nice in the sandbox, and I wouldn’t expect them to do so in a situation where they’ve likely paid a lot of money to control said sandbox. That money for the partnership is the bottom line, literally and figuratively.

Given the above, it might surprise you to hear that you can actually take in a baseball game without losing yourself in the politics of beer. The Nats will hopefully play more than 81 games in their home confines this year on their way to the postseason success that has eluded them in their first decade. Regardless of who has branded the terrace…restaurant…loft…staircase…emergency exit…happy hour…and so forth, it’s encouraging that even with a new sheriff in town the option for consumers to choose local, craft beer remains intact.