Earlier this year, we brought you the news that a team of well-known beer industry professionals would be bringing ANXO Cidery & Pintxos Bar to Shaw. The Basque-inspired restaurant will double as the District's first cidery. Sam and Rachel Fitz, Tim Prendergast, and Cooper Sheehan (variously of Meridian Pint, Pizzeria Paradiso, Boundary Road, and The Big Stick) and Brad Walker (Boundary Stone) are teaming up for an endeavor that will "honor the Basque culinary traditions of honesty, simplicity, and quality by showcasing local producers’ best efforts." Originally slated for opening in late 2015, it now looks like it will be early spring 2016 before ANXO opens at 300 Florida Avenue NW.

Until they open, ANXO is hosting a series of pop-up dinners at various restaurants across the District. They recently invited us to be their guests at a pop-up at Petworth's Crane & Turtle. Basque cider and wine were paired across four courses (plus the namesake pintxos), and while the wine aspect isn't the bag of this blogger (they make potables out of grapes…who knew?), the ciders cut a nice swath across the flavors I tend to associate with Basque cider: dry, mineral, slightly acetic, a touch funky, and very thirst-quenching. It's clear that a lot of research has gone into finding both complimentary flavor profiles and the history of these offerings.

A pop-up restaurant necessarily is beholden to the space in which it is operating, and Crane and Turtle's is both cozy and designed for more of an upscale dining experience. This struck me as somewhat at odds with what I have heard about the Basque food and beverage culture, namely that it's boisterous, lowkey, populist, and fun. It's the kind of "come as you are" peasant food that has satisfied generations of people and families making a living off of the land (and sea) for hundreds of years. My hope (selfishly, since this is the kind of place I like to drink in) is that ANXO's permanent home will reflect these qualities. After all, ANXO is named after the Basque "wild man."

Enjoy some scenes from the scene below, and thanks again to the folks at ANXO for hosting us. 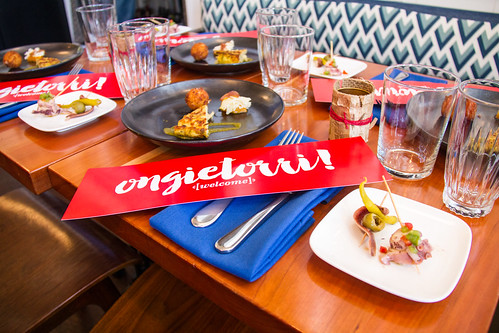